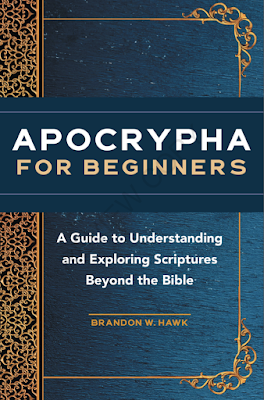 Long ago, when I was probably about 17 or 18 years old, I read about the findings at Nag Hammadi for the first time. As a young atheist who attended a series of religious schools, I'd always taken comfort in the idea that there were doubtful and suppressed books that didn't end up in the Bible. And so I went on a quest, and at the Publix bookstore in downtown Cleveland found a copy of the 1959 edition of the Gospel of Thomas. Here was my kind of gospel -- instead of being, like John's, full of admonishments and dogma, it was a mystical set of sayings, more like the Tao Te Ching than any Biblical book. I even made my own sort of "translation," giving the English transliteration in the book a more King-Jamesy feel.

Over the years, I've added many volumes to my shelf of non-canonical texts, including some truly unorthodox "pseudepigraphia" -- works that  are (as my colleague Brandon Hawk puts it in his excellent Apocrypha for Beginners) "attributed to a certain person even though the work was not written by that person" -- among them the Greater and Lesser Keys of Solomon and the "Six and Seven Books of Moses," both of which are more medieval grimoires than anything emanating from the Holy Land.

And this is where Hawk's book is most valuable: in terms of authenticity (real and perceived), the "apocrypha" are a bit of a minefield, containing everything from books, such as the Gospel of Thomas, which likely contain authentic sayings as old as the four Synoptic Gospels, to Paul's Letter to the Laodiceans, which is almost certainly a late forgery. Hawk covers Jewish apocrypha as well, offering some insight into why some of them -- the so-called "second canon" made it into a certain tier of the canonical assemblage, while others remained languishing in the wilderness. Simply reading over these clear, concise summaries opens a window into the sometimes judicious, sometimes haphazard, paths by which books came into -- or exited -- the canon.

There's a story -- an "apocryphal" one to be sure -- that the Christian canon was established at the Council of Nicea in 325 CE by a curious test -- its source is the ninth-century Synodicon Vetus. In this version of events,  the Council left all the candidates for scripture next to a table overnight, then prayed the God would show which were divinely inspired. The next morning, so the story goes, the canonical books were found atop the table, while the apocryphal ones were underneath it. It's a great story though certainly not a true one.

Hawk's concise guide gives us the best historical account of why and how each book ended up atop, or beneath, this imaginary table. Many that ended up on the floor were, in fact, widely accepted in certain religious circles for great lengths of time, while others -- such as the Old Testament book of Esther -- made it into the canon by the skin of their teeth, so to speak, brought into the sanctuary but held ever-so-slightly apart, like a hot dish with oven tongs. It's a great place to start exploring, not just these books themselves, but the curious processes by which then -- and indeed today -- books come to enter a canon, whether religious or secular.

Posted by Russell Potter at 9:52 AM

Russell Potter
Russell Potter is Professor of English at Rhode Island College. He speciality is the history of polar exploration (Arctic Spectacles, 2007), with a focus on the the lost 1845 Arctic expedition of Sir John Franklin; his 2016 book, Finding Franklin: The Untold Story of a 165-Year Search,details the long search for evidence of the expedition. In 2022, along with Peter Carney, Regina Koellner, and Mary Williamson, he has edited a volume containing all the known letters to and from Franklin's men: May We Be Spared to Meet on Earth: Letters of the Lost Franklin Arctic Expedition; it will be published in 2022 by McGill-Queen's University Press.

Russell A. Potter teaches English and Media Studies at Rhode Island College in Providence, Rhode Island. This blog showcases printed and photographic oddities discovered in the course of his research, both in archives and in his own attic. His novel Pyg: The Memoirs of Toby the Learned Pig, was published by Penguin Books in 2012.

This work is licensed under a Creative Commons Attribution-NonCommercial-NoDerivs 3.0 Unported License.